You can expect between 296 to 355 passengers on a typical sailing. This means that at the higher number (usually peak and holiday sailings) Silver Wind has a space ratio of 47.7 . (A space ratio less than 33 means that you may find the ship crowded in areas. A space ratio greater than 39 means that there should be plenty of space for each passenger.) When this ship isn't sailing at capacity the space ratio can be as good as 57.2.

There are 9 decks on this ship. The highest deck number is 9. The number of decks with passenger cabins is 5.

The following ships share the same class as this ship. This means the basic design and layout of the ship is the same. For the most part the cabins will be identical among these ships, but may be decorated differently.
1994 - Silver Cloud
1995 - Silver Wind
2000 - Silver Shadow
2001 - Silver Whisper

There are 2 special needs cabins on this ship. These cabins have been modified for accessibility purposes.

During refurbishment in Oct 2016 the pool deck received new teak decking, new satellite antennas for better internet, interactive TV's with on-demand movies were added in every cabin, the suites were refreshed with dark emperor marble floors.

View All Cruises
Powered by Cruiseline.com 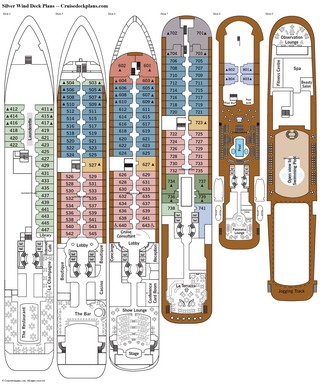