You can expect between 3046 to 3655 passengers on a typical sailing. This means that at the higher number (usually peak and holiday sailings) Celebrity Reflection has a space ratio of 34.3 . (A space ratio less than 33 means that you may find the ship crowded in areas. A space ratio greater than 39 means that there should be plenty of space for each passenger.) When this ship isn't sailing at capacity the space ratio can be as good as 41.2.

The ship last major refurbishment was in Oct 2017 .

Celebrity ReflectionSM is a marvel offering three new suites, including 34 new AquaClass® Suites that feature stunning 79 square foot verandas, so you can relax like never before. 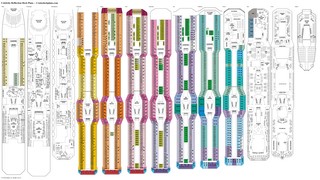