You can expect between 2850 to 3420 passengers on a typical sailing. This means that at the higher number (usually peak and holiday sailings) Celebrity Eclipse has a space ratio of 35.6 . (A space ratio less than 33 means that you may find the ship crowded in areas. A space ratio greater than 39 means that there should be plenty of space for each passenger.) When this ship isn't sailing at capacity the space ratio can be as good as 42.8.

The ship last major refurbishment was in Apr 2015 .

There are 15 decks on this ship. The highest deck number is 16. The number of decks with passenger cabins is 8.

Since Celebrity Eclipse® joined our fleet in 2010, she has dazzled and amazed even the most well-traveled cruisers. Like her Solstice® Class sisters before her, she showcases spectacular vistas with 85% of all staterooms having sweeping veranda views.
Celebrity Eclipse hosts Qsine®, a dining venue with a unique and playful approach to familiar dishes from around the world, and Celebrity iLoungeSM, a hip, modern Internet café offering guests what they have asked for—easy access to the Internet, inspiring classes and latest tech gadgets.
Add the fresh green grass on the top deck's Lawn Club and the incredibly pampering services in AquaSpa®, and you may never want to set foot on land again.

During Drydock in 2015, Celebrity added GastroBar in place of Cellar Masters. 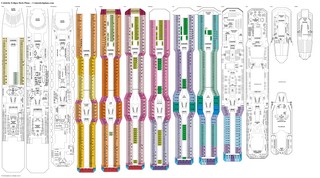